Ben Kerr is a Victoria native, mountain biker, foodie, father, CEO and Lead Analyst for Foundry Spatial, and our Tectorian of the Week!

There can be no arguing that Ben is not a true Tectorian.  He was born and raised here, is a UVic geography grad, gets involved in local organizations with his two young daughters, is growing a local tech company doing very cool things, and says “I have never had a reason to leave and plan for it to stay that way! Victoria has such a beautiful natural setting and it is really beginning to emerge culturally and business-wise. I feel like Victoria is starting to build an amazingly unique new identity which is up there with the best places in the world!” 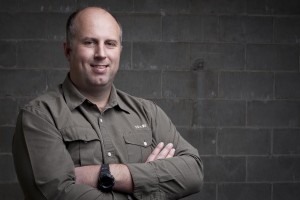 Foundry Spatial provides environmental analytics SAAS tools, with a primary focus on water.  They offer customers complete, streamlined environmental and watershed information – meaning they can answer questions that directly impact the viability and sustainability of both a business, and its surrounding environment.

Ben started the company out as a one man environmental consultancy, or as he recalls, “me in my garage with a bunch of spiders.”  Over the last 6 years Foundry Spatial has grown steadily, and now they’re rolling out a national service at the end of the year, that will provide a network of waterway understanding all across Canada!

Why would someone need to know how much water is in a river?

The Showcase Showdown panel asked Ben the same thing during Experience Tectoria.  His answer really helped to win over everyone in the room, because of the information he provided, and the affable manner in which he responded.

If you asked Ben again he would say “people need water to drink and for day to day life. Fish and all kinds of other animals depend on rivers for their livelihoods. Farmers use the water from rivers to grow the food we eat. Industries need water too to keep our economy going, things like hydro and energy production, pulp and paper, and oil and gas. With demand growing from all these sectors and the challenges we’re facing in a changing climate, technology can help us find balance. It’s everyone that cares about water!”

Ben and Foundry Spatial participated in both the Demo Camp and Showcase Showdown during Experience Tectoria.  In the Showcase Showdown he reached the final pairing, and the panel called him “the hands-down friendliest contestant!” 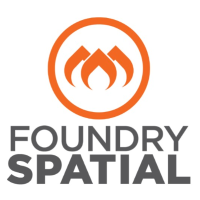 What’s next for Foundry Spatial?

They have their sights set on expansion across the rest of North America in the next three years. Ben asserts that “we’ll continue to prioritize the areas of greatest need, where demand and shortages are causing conflict.”

From water, to gravel (and the end of this article)

Ben started his career in gravel exploration. It may not be the most widely appealing topic, but Ben loves it, so one of the guys in his office offered to add some flair to that story for him…

Born at age 7, Ben knew that one day, he would grow up to stare at rocks in a serious way. One day, he found the best gravel he had ever seen, but his bucket was broken.

His desire for gravel persists, driven by the one that got away.