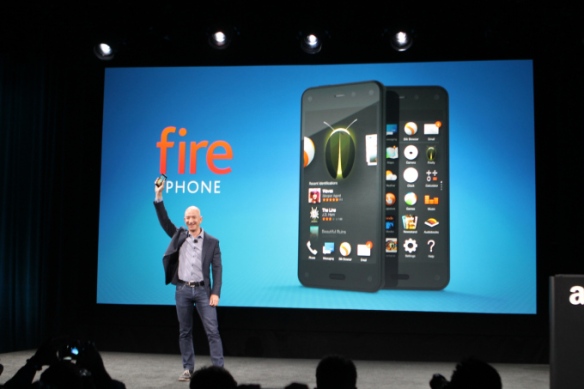 Amazon has launched its Fire Phone, a $199 smartphone with 3D cameras and all the Amazon services you could ever imagine.

The Fire Phone has a 4.7-inch HD display, aluminum buttons, a Qualcomm processor, Adreno 330 graphics, and 2GB of RAM.

There’s also a 13-megapixel camera, an f/2.0 lens, and optical image stabilization. Bezos compared the Fire Phone to the iPhone 5S and the Samsung Galaxy S5, saying that no matter the situation the Fire Phone will take better shots. There’s a quick-access shutter button on the side, and unlimited cloud storage for your photos.

It all runs on Amazon’s Android-based Fire OS.

The 3D aspect of the phone seems to be aimed at providing “shifting” wallpaper and lockscreen that changes depending on how you look at it.

There are also 3D Maps: looking for a restaurant and at the Empire State Building and the view changes every time you tilt your phone.

It’s also part of the navigation of the device — a tilt of the phone opens up a navigation drawer, or scrolls through options.

No word when the Amazon Fire will make it to Canada, though!