Jason Long created Engenuics 15 years ago in Calgary, without even realizing it.

Engenuics innovates custom hardware and firmware for companies all over the world and they’re based in Victoria, right beside CAMACC Systems and Schneider Electric off Keating Cross Road.

Just after the “Y2K” frenzy at the millennium mark, Jason (Founder and President of Engenuics), began trying to learn what wasn’t being taught in electrical engineering programs; the exciting, practical, hands-on stuff. He decided to start teaching for free in Calgary to peers as a way to be accountable so he couldn’t throw in the towel easily. The room started to fill up and before he knew it, 10 years had gone by.

In 2010, he officially incorporated Engenuics. In 2012 he was full time with the company and won a prestigious engineering award for his mentorship. In 2013, he moved to Victoria, found VIATEC and Engenuics became a finalist for Startup of the Year at the VIATEC Technology Awards.

“The orca we scored is hanging from the ceiling in the office,” reflected Jason. “We started to get to know the VIATEC team while working hard to build relationships with people on the island, and we were lucky enough to get a couple of nominations. Prepping for [the award] was a great experience and working with VIATEC to do the video was awesome. For a little company like Engenuics, that nomination really was significant and we were able to leverage it. It was humbling to be up there with some pretty amazing companies.”

The company has been unstoppable since. “[In 2013 we were] bursting at the seams with ideas but cautiously progressing as a bootstrapped company has to do,” explained Jason. “Now in 2015 we have an office, four employees, and some crazy good things are happening.” 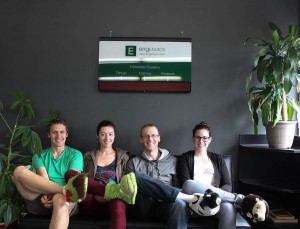 The team at Engenuics supports electronic developers and hobbyists by providing excellent learning platforms and essential tools born from their own design work of embedded systems.

“We try to find a way to teach through all of the work we complete, and thus have a growing lineup of valuable training courses unlike anything that exists,” commented Jason.  “What we’re really striving towards is redefining how engineers in the industry are trained, and our very unique experience enables us to build relationships between companies, universities and students in a rather glorious win-win-win way.” 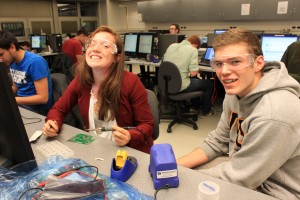 Students having fun soldering at the first MPG at UVic in 2013.

This year is looking very promising for Engenuics; they’re right at their tipping point. A few weeks ago they invited Grade 8 students to get a glimpse of Engenuics and they were all able to dive in by soldering devices, the hands-on approach Jason is so passionate about. They have also launched youth summer camps and they’ve formed a great relationship with a major electronics company (more details being announced soon). Lastly, with the success of their free program at UVic and three other schools, they’re upgrading their university program and hope to offer it to even more schools.

“I want to keep growing as a company and as an individual so that I can reach more people. I love to give stuff away, and usually it’s my wife who reminds me that a company is supposed to make money at some point. But hey, we pay our bills, and even though I make less than our co-op student and I still clean the office toilets, I have never been happier and more excited about what I do each day.” 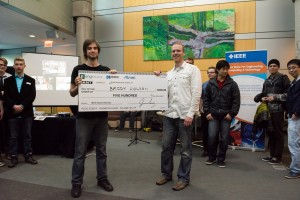 Jason Long presents Brody Holden with the MPG bursary at the UVic wrap-up party on March 26, 2015.