Reyna Jenkyns, leader of Ocean Networks Canada‘s Data Stewardship & Operations Support team (and a Giant Jenga competitor to be reckoned with) is our Tectorian of the Week.

Ocean Networks Canada is based at UVic and operates the  NEPTUNE and VENUS cabled ocean observatories. These underwater observatories collect data on physical, chemical, biological, and geological aspects of the ocean over long periods of time periods, supporting research on complex Earth processes in ways not previously possible.

Jenkyns is well-regarded by collaborators all over the world for creating and managing tools with other ocean data providers, for participating in cruise expeditions and collaborating with the oceanographic community, and for just generally helping wire the abyss. 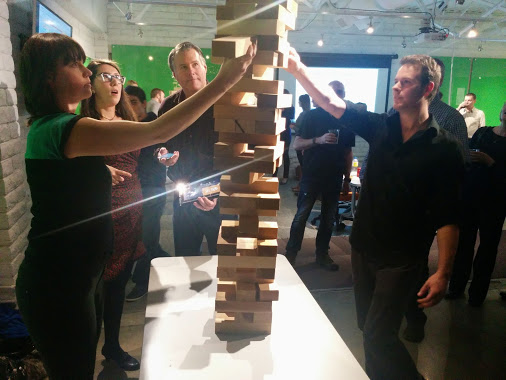 After an intense, prolonged battle at the 2015 VIATeC New Year’s Party last week, Jenkyns narrowly missed winning two tickets to a Canucks game in Vancouver. It was all for a good cause, however – by playing in the tournament Jenkyns helped raise a ton of cash for the Mustard Seed Food Bank. That alone makes her and her partner prime candidates for a Tectorian nomination.

Jenkyns also has another common key Tectorian trait: she’s not from here originally, but moved to Victoria to take part in our booming tech scene.

She received her Bachelor of Mathematics in the Applied Mathematics Co-operative Program from the famed University of Waterloo. What to do next? Travel to Canada’s second largest oceans cluster to pursue a Master of Science in Ocean Physics at UVic, of course!

Jenkyns’ research area at UVic was “the transfer of momentum between internal tides and subinertial flow at a dissipating surface reflection.”

As a graduate student, she had the opportunity to collect oceanographic data on research cruises in coastal BC and the East Pacific Ocean. This fascination with water originates from childhood summers at Lake Winnipeg, Manitoba.

One interesting perk of her job: Jenkyns has gone snorkeling in Iceland’s chilly waters.